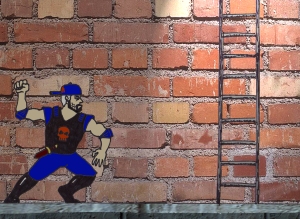 Turtle inched his way forward down the tunnel, one careful step at a time. If you didn’t know what you were doing you could find yourself neck deep in raw sewage real fast. Raw sewage if you were lucky. There were far worse things in the sinkholes, and some of them were alive. Another man might have been frightened, or at least grossed out. Not Turtle. He had been slogging through shit all his life, one way or another. He lived for this.

He froze. Something was out there. It was just a blip, a little orange flash way out there in his peripheral, but it was definitely there. The Big Boss didn’t shell out for these military-grade night vision goggles for nothing. Probably just a rat, but a careless soldier was a dead solider. He’d learned that a long time ago.

Turtle’s black-gloved left hand, acting independently, had shot up in the shape of a fist. Behind him, his squad was instantly on alert. They didn’t make a sound, but he knew they were there, locked and loaded. Turtle knew them because he was one of them- a solider since age 11 on Queens Boulevard. Every man who served under him would kill or die for him without a second thought.

Yeah. Just a rat. Before he could stop himself, Turtle had mentally clocked its weight: big boy, about a seven-pounder. That was from the dark years. He had sold rat meat when that was all there was, and yeah, he might have eaten it once or twice in his time. It didn’t taste any worse than some of the Gyro places back home. But those days were over now. He had his men, and he had the Big Boss, and most of all, he had The Group. The GPS told him they were close now. He took four deep breaths to calm himself, not that he really needed to. A few quick hand signals and his men fanned out behind him, ready for action. Turtle took the lead, like he always did. In 15 seconds flat, he was up the ladder and had the hatch open.

They emerged from the sewer into a sub-basement storeroom. Every available surface was piled six inches deep with- Turtle could barely believe the irony, but there they were, unmistakable – ancient movie scripts. Insides the once-glossy covers, each one held one hundred and ten pages, give or take a few, now yellowed and slowly disintegrating, never to be rewritten into their better or more profitable selves. Here they crumbled, their wonder and adventure imprisoned forever in the flat black and white of the Cole and Haag format. “To what base uses we may return,” quipped Turtle’s internal Voice-Over.

He picked one off the top of the pile, and almost smiled at the title: “Benji: Arctic Dog.”

No. No time for that shit now. He tossed the script aside and led his men out into the hall. The first guard’s body was halfway to the floor before he knew what had hit him. These guys talked a big game, put on a lot of glitz, but at the end of the day they were dilettantes: War just wasn’t their thing.

Exactly seven minutes later, Turtle and his men returned the way they came, a razor-thin 20 terabyte jet-black hard disc nestled securely in Turtle’s pack. All 12 people who had laid eyes on them were now dead.

Between the stiffening fingers of the biggest one, Turtle had left his calling card, as he always did: All black, with a white Death’s Head leering out at the world. And below it, in unmissable block letters: